The Winter 2022 newsletter is available to read now

Sephardic Tour in the press

The Winter 2021 newsletter is available to read now

Read the WSJHS statement on racism. 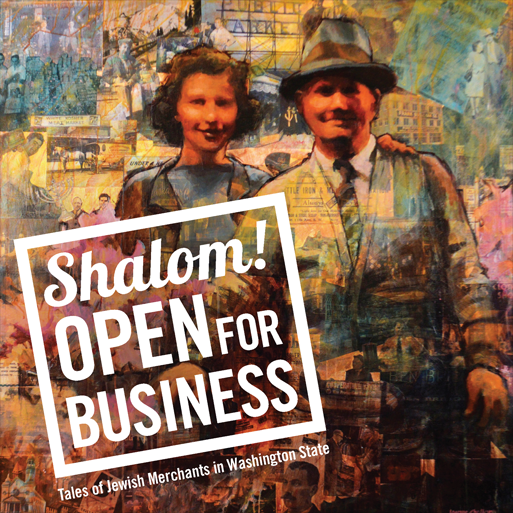 The David Douglas Award recognizes the significant contribution of an individual or an organization through projects, exhibits, educational products or any other vehicle that informs or expands appreciation of any field of Washington State history during the previous year.

Shalom! was a major initiative that brought the remarkable story of the Jewish community in Washington State to an entirely new audience, and became a model of how exhibits built from community experience can enrich us all.

The Washington State Historical Society chose to honor the WSJHS for our unique approach to the project. Here is what they had to say about our work:

Shalom! was made possible because the WSJHS went directly to the community as the critical first step, inviting members of the community to consider themselves as storytellers and historians.  Then they carefully built that mosaic layer by layer.  Along the way, the Society partnered with organizations that reached far beyond the Jewish community—working, for example, with the University of Washington on the stunning oral histories that were featured in the show; partnering with MOHAI on the exhibit design;  collaborating with a Microsoft technology expert to develop an original and highly effective app; engaging Book-It theatre to present special  programming; and above all connecting with literally hundreds of individuals who contributed the stories, images and artifacts that captured an era and a state.  The exhibit even incorporated an original artwork commissioned just for the display by an artist whose own history was deeply rooted in the story—a beautiful reminder that the history being told is an ongoing saga whose memories enrich us and whose contributions still shape us.

The exhibit was on display between July 2014-January 2015 at the Museum of History of Industry in Seattle. It is now available for travel. Contact the WSJHS office for more details.

Have a Sweet Shavuot With Cheesecake From A Maven

Shavuot begins at sunset on June 3, and ends at nightfall on June 5. One of the most popular traditions for this holiday is to eat dairy foods, such as cheesecake, blintzes, and ice cream. Below is a popular recipe for a cheesecake from the Washington State Jewish Historical Society’s book, Yesterday’s Mavens, Today’s Foodies: Traditions from Northwest Jewish Kitchens.
The tradition is because Shavuot celebrates the giving of the Torah to the Jews. Before the giving of the Torah, kosher dietary laws did not exist. Hence, one explanation for the eating of dairy on Shavuot is that when the Jews received the Torah they did not have the tools they would need to prepare kosher meat. As a result their first meal after receiving the Torah was a dairy meal. Another possible explanation has to do with Shir HaShirim (the Song of Songs). Verse 4:11 says “milk and honey are under your tongue” and some have said that the Torah is like the milk in this verse.
Blanche’s Cheescake

“This is Blanche Weisfield’s cheesecake recipe, which my mother, Adele Golub, served at many special family dinners. Blanche was a delightful woman who entertained often and elegantly. It is still the lightest cheesecake I have ever tasted. I imagine an update would be to use fresh berries, rather than canned or frozen, for glaze options.”

Butter a 9-inch springform pan.
Combine the wafers and the butter and press the crumbs evenly around the pan.

Preheat the oven to 300 degrees

Place the egg whites in the bowl of an electric mixer and beat until the whites are stiff.

Cream the sugar and cream cheese together in an electric mixer. Add the egg yolks and mix well. Stir in the sour cream, lemon juice, and vanilla. Fold in the beaten egg whites.

Pour the mixture over the crust. Bake for 1 hour and 15 minutes. Turn the oven off and leave the cake in the oven for several hours, or overnight, to cool.

Slowly bring the frozen strawberries to a boil in a small saucepan. Add the cornstarch and sugar and boil for about 5 minutes. Cool, and then pour the glaze over the top of the cooled cheesecake.

1 14-ounce can blueberries, with the juices

Separate the juice from the blueberries and place the juice in a small saucepan. Add the cornstarch and sugar to the juice and bring to a boil. Boil until thick, add the blueberries, and cool. Pour the glaze over the top of the cooled cheesecake.

The Washington State Jewish Historical Society proudly announces the publication of our new book, Distant Replay!: Washington’s Jewish Sports Heroes. For the past few years, the WSJHS has been researching and collecting hundreds of exciting stories and profiles on Jewish athletes from the high school to college to the professional level in Washington State.
Despite being less than 1 percent of the state’s population, Washington State Jews have been professional athletes, owned and operated professional sports franchises, been promoters, reporters, sports anchors, radio hosts, collectors, fighters, cheerleaders, and daredevils. No matter the sport or team, the presence of Jews has been felt in all realms of Washington State athletics. “Distant Replay” includes stories of Jews involved with football, baseball, basketball, soccer; the Longacres Race Track, Emerald Downs, the Seattle Seahawks, Mariners, Supersonics, Sounders, and the Trailblazers.