In 1968, when Dr. Edward A. Stern was a young scientist at the University of Washington in Seattle, he joined with other scientists to question the logic of the arms race between the United States and the Soviet Union, arguing against the Pentagon's planned location of ABM missiles in Seattle. He advocated for a negotiated solution to national security rather than inflaming the arms race by spending more and more money on military hardware. His tireless lobbying, organizing, and public speaking helped defeat the Pentagon’s plans to locate ABM missiles at Fort Lawton, paving the way for Fort Lawton to be given back to the city so that it could turn the former military base into Discovery Park. His status as a respected physicist added weight to the arguments of a loose coalition of citizens and local politicians who opposed the Pentagon and won. 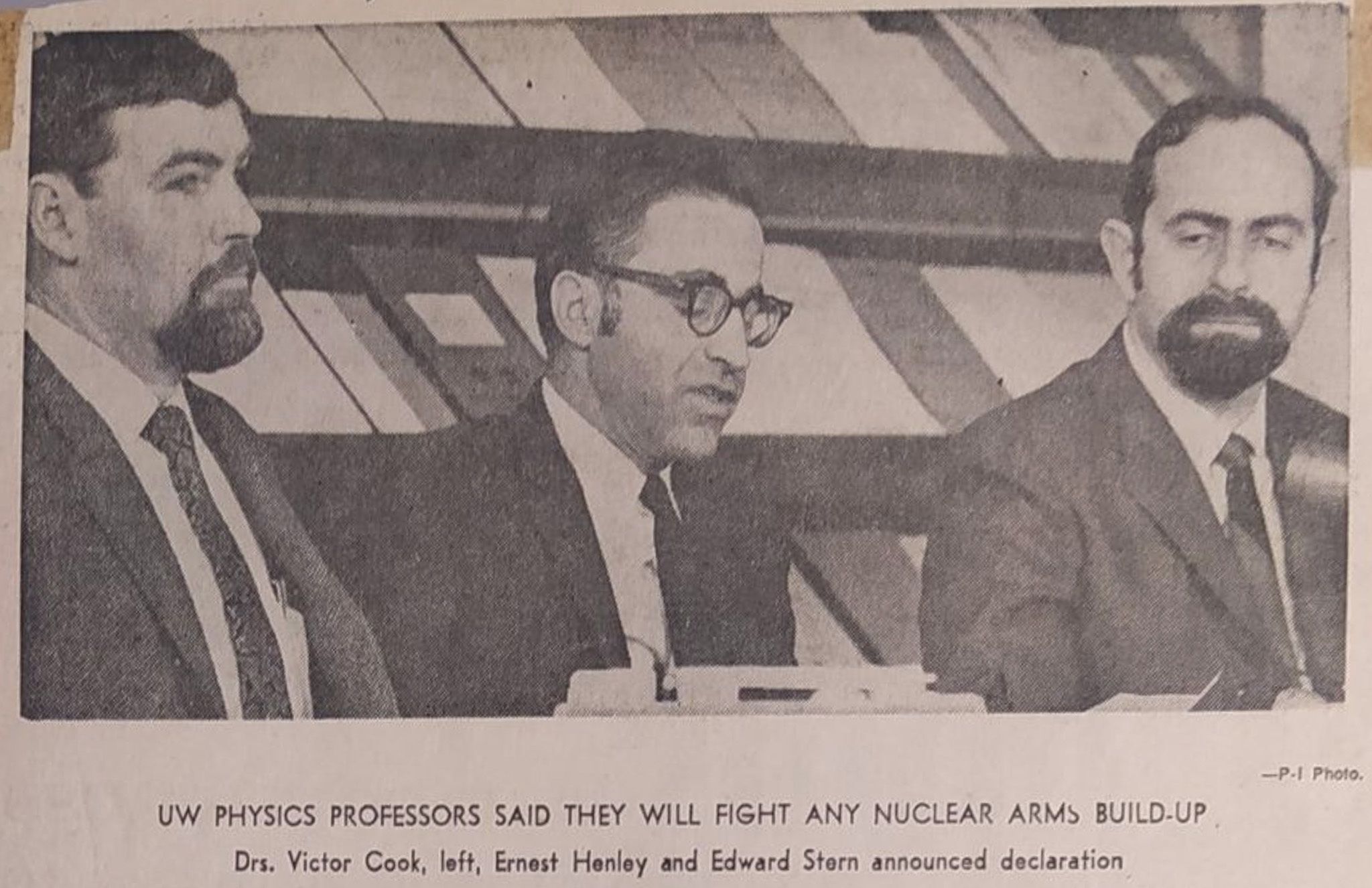 Newspaper clipping from The Seattle P-I, 1968

Dr. Stern and the Refuseniks

In 1973, Dr. Stern became intensely interested in the plight of Jewish scientists in the Soviet Union, whose requests to emigrate to Israel had resulted in harassment, oppression, and an inability to work in their chosen professions. These scientists, and other Jews who were refused permission to leave the USSR, became known as “Refuseniks.” As it happened, around this time a Russian mathematician who was traveling in the United States visited the University of Washington, and she told Dr. Stern that it was “helpful to telephone these people, the Refuseniks, and talk to them, and show them support that way,” Dr. Stern explained in an interview with Mildred Rosenbaum for the WSJHS in 1997. “That was a complete surprise to me, because, first of all, I didn't think that I could call the Soviet Union, particularly people who were being ostracized by the Soviet authorities. I was also afraid this might do some harm to them, if l talked to them under such circumstances. She assured me this was not the case, and she even gave me a phone number to call up Mark Azbel, a Soviet Jewish scientist.”

Before calling, Dr. Stern came up with idea of offering Azbel, a fellow physicist, and his colleague Alexander Voronel visiting professorships at UW. Once he secured the university’s agreement, he called Dr. Azbel and discovered that he, Dr. Voronel, Dr. Victor Brailovsky, and three other scientists were in the midst of a hunger strike to protest their situation. “This hunger strike was something that they were doing out of desperation,” Dr. Stern told the WSJHS, “because they wanted to get some publicity for their plight. They had applied to go to Israel, had lost their jobs, and were in the state of complete isolation by Soviet society. They therefore banded together among themselves, but felt, and expressed this point very strongly, that it was necessary to publicize their plight outside of the Soviet Union, because this would give them protection: anything that would happen to them would be publicized in the West. So I became, by just this chance timing, one of their main conduits of information to the West.” 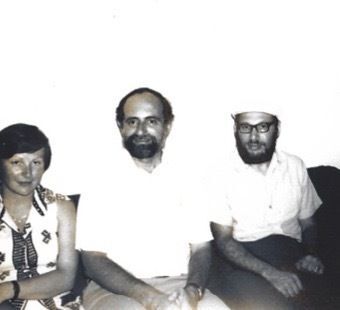 Visiting the refuseniks after their hunger strike in Moscow, 1974

Dr. Stern also contacted U.S. Senator Henry “Scoop” Jackson of Washington State, who was working on the Jackson-Vanik Amendment—a law that would economically sanction countries like the Soviet Union that denied citizens freedom to emigrate. Dr. Stern told Senator Jackson about the scientists’ hunger strike, and his concern that they might do lasting damage to their health. Senator Jackson asked Dr. Stern to tell them their message had gotten through, and with this encouragement they were able to call an end to the hunger strike after 15 days. “Senator Jackson really impressed me in his support of the Soviet Jews. I could see that in his case it was just not a political act, but it was a really emotional, personal act. I remember telling him some of the comments that my Russian contacts said, through the telephone conversations I had with them, about how much they needed his help, needed support, and he was just emotionally moved by that.” 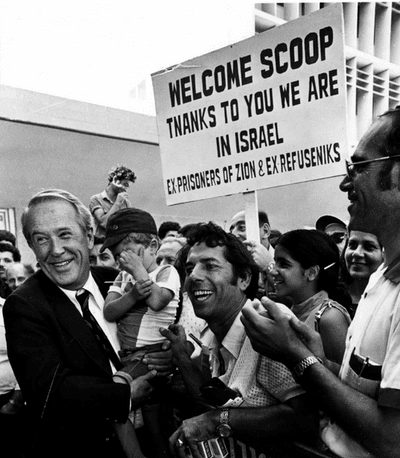 Senator Henry “Scoop” Jackson meeting with former Refuseniks after they were allowed to emigrate to Israel.

After the hunger strike ended, Dr. Stern continued to have regular phone conversations with these and other Jewish scientists in the USSR, and tapes of those conversations are in the WSJHS archives. A few months later, there was an international scientific conference in the Soviet Union, which Ed attended, accompanied by Sylvia. He and some of his colleagues attempted to pressure the Soviet authorities to allow the Refuseniks, who had been ostracized from the scientific community, to attend the conference, and while this was unsuccessful, Ed was able to meet the scientists he had spoken to by phone while he was in the USSR. He also met the legendary dissident and nuclear physicist Andrei Sakharov, who lived in a small apartment in Moscow.

The trip had another benefit for Dr. Stern: it allowed him to visit Leningrad, where his father had been born. "It was an emotional experience to walk along these streets around where my father lived.  It helped explain to [the Soviet scientists] why I was so emotionally involved in this issue. Because of my origins, I could have been in the Soviet Union, in that situation that the Refuseniks were in. They were almost exactly my age. I was born in 1930, Voronel was born in 1931, and Azbel in 1932. So I had a strong identification with them, because really just by luck of fate I could have been in their situation. So I really felt driven to try to help them.

“That's something that I'm very proud of, because I felt that I personally may have saved some lives, or certainly saved a lot of pain for some of the scientists.”

Throughout his time in the USSR, Dr. Stern was under surveillance by the KGB, though he was never approached by them. Upon his return to the US and for the following ten years, Dr. Stern did as much as he could to publicize the plight of the Refuseniks, including meeting and corresponding with many politicians in Washington State and Washington DC. The Soviet authorities took notice and were not pleased with him. “The Novosti Press Agency [a state-run news organization] wrote an article about me that said I was a reactionary Zionist, and better known for my reactionary Zionist activities than for my activities as a scientist, and I said I considered that a terrible insult, because I'm not known anywhere as a reactionary Zionist except in the Soviet Union. But, of course, it was actually a great compliment, because it indicated that I was having an impact on the Soviet authorities, that they really noticed me, and I was being successful. Other evidence that I had that I was successful was that I wasn’t allowed to enter the Soviet Union any longer.” 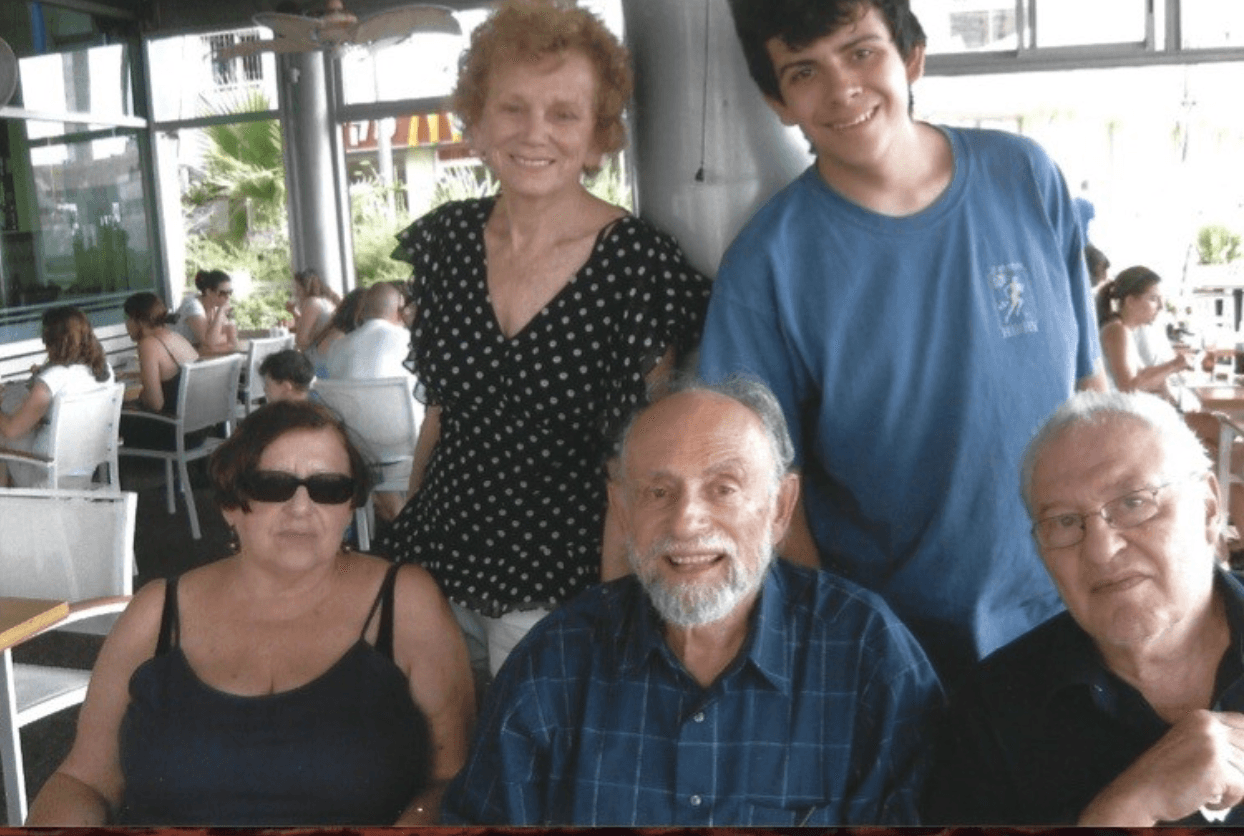 Keeping up long term friendships with the refusenik hunger strikers, going out to lunch in Tel Aviv Israel with the Voronels, 2010

Sylvia also did her part, raising money for the refuseniks from local synagogues and Jewish institutions, writing articles for the Seattle Times about their experiences in the USSR and giving public talks for the Jewish community, which were reported on in the Jewish Transcript. Thanks in part to the work of people like the Sterns, the Refuseniks were eventually allowed to leave the USSR for Israel. In later years, Dr. Stern visited many of them in Israel and they visited him in Seattle.

Primary source material on Dr. Edward Stern’s work with the Russian refuseniks in the 1970s and ‘80s can be found in Washington State Jewish Archives, housed in the University of Washington Special Collections.